Artworks, including photographs, can be considered as a material culture artifact and reflect the time and culture of the people who made them. Just like a diary entry or a letter, photographs can be considered original documents or primary resources that can be used for research by historians. Look at any social studies textbook and you will find illustrations that include photographs and artwork of the period. This is important for teachers to note: as one of the standards in the National Council for Social Studies Standards reads, "Explain and give examples of how language, literature, the arts, architecture, other artifacts, traditions, beliefs, values, and behaviors contribute to the development and transmission of culture." 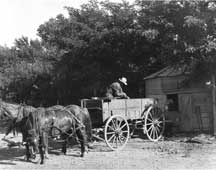 One must be critical when viewing art as a document, even a photograph. Artists and photographers may pose or set up their pictures. Artists have the ability to leave out and add details. Even a photographer can cut details out of a photograph by cropping a photo and today's digital photography allows for all types of manipulation.

The photographs of Bill Jeffcoat record life in the Abilene, Kansas area from the 1940's on. They are primary visual resources, reflecting what Abilene and the surrounding area looked like, the types of work that were common, and what life was like. Each of his photographs could be considered using the Interpreting a Historical Photograph worksheet (pdf).

Jeffcoat was also an artist, even though he had received little formal artistic training. He was particularyly interested in aspects of composition and the textures, shapes, and lines he saw in the world around him and tried to capture them on film. As you visit the virtual exhibition Thru my lens, you will notice that Jeffcoat often mentions aspects of art when he writes about the photographs.

Several of Bill Jeffcoat's photographs have been chosen for further exploration below. As you choose a thumbnail, you will link to a large version of the photograph, Bill Jeffcoat's explanation, and questions to help you explore the photograph as historical resource and art object. Highlighted words will link you to definitions or resources that you may find helpful.