Status of ITS resources

Enrico Isamu Ōyama represents a contemporary generation with a distinctly global perspective. Child of an Italian father and a Japanese mother, Ōyama was born and raised in Tokyo, Japan, but also lived for extended periods in North Italy. In Tokyo, he immersed himself in an underground art scene infused with the street culture of  the city and its global influences. In 2011, Ōyama arrived in New York for a residency sponsored by the Asian Cultural Council and has since established his studio in Brooklyn, New York.

Ubiquitous surveyed how Ōyama channeled his interests in the street cultures of Tokyo and American cities, Western abstract art, and Japanese calligraphy to create Quick Turn Structure (QTS), his signature expression. QTS thrives in varied creative platforms, including painting, digital media, sound, and fashion. In addition to works on display in the Beach Museum of Art’s Hyle Gallery, the exhibition extended beyond museum walls to a mural in the retail district near campus (Aggieville), a sound installation in the Mark A. Chapman Gallery inside Kansas State University’s Willard Hall, and a live painting performance on October 7th in the museum parking lot. Through the QTS, Ōyama gives visual form to the mixed-race, multicultural, transnational experiences of people in today’s world of fluid borders and interconnectivity.

A book documenting the Ubiquitous project, and the innovative ways it engaged Kansas communities, is now available here.

This exhibition was sponsored by Anderson Bed and Breakfast, Little Apple Art Supply, Manhattan Broadcasting Company, and made possible in part by a grant from The Japan Foundation, New York. 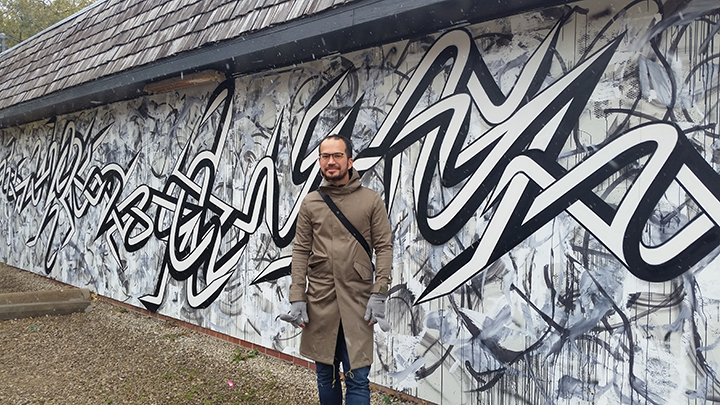 FFIGURATI #199 is a mural on the north wall of 706 N. 11th Street. Enrico Isamu Ōyama (seen in the photo above) created it during his residency in Manhattan in October 2017, as part of his first U.S. museum solo exhibition Ubiquitous: Enrico Isamu Ōyama at the Beach Museum of Art. He was assisted by Patricia Melton, K-State BFA ‘17. In the foreground is the artist’s signature form, Quick Turn Structure (QTS), painted with MTN Colors spray paint and assorted caps to control spray rate and line width.
More on the mural here.